I started a company called imactivate in 2013 to make real objects digitally active. We quietly developed and maintained the Phonegap plugin for Moodstocks until they were acquired by Google in 2016. We released Rusty the Squeaky Robot, an augmented-reality physical book for children with real-time translations and human voices, in 2014. This proved that real product innovation could be powered by augmented reality.

Since 2013 a lot has changed. I still work on computer vision, such as The Little Car Counter, but I now focus on selling systems and data analysis based on this. Our main clients are businesses and governments. I've worked with the Open Data Institute Leeds since it started. I was the first associate and I'm now the Head of Data. As early supporters I've played a part in making Leeds one of the world's best cities for open data.

I write for various publication about industrial strategy in the UK, and I sell software I've written for Windows 10. My top-seller is the top-rated photo management app PhotoMaps. If you've ever checked your bin day in Leeds using an app, I wrote it. If you're one of the thousands of teachers being surveyed every day by the Teacher Tapp app, that's our work too.

My latest thing I'm doing is The Data City, a spin-out from ODILeeds by me, Paul, and Alex. We're using huge amounts of data to better understand economic development and the potential for innovation.


Before starting imactivate I completed my Ph.D in the Systems Biology of Malaria at the University of Leeds. MetNetMaker, my popular tool for manually building small metabolic networks, is still available on this site. I believe more and more that improving the usability of software in scientific research could help us achieve much more. One day I'd like to try that.

You can follow me on twitter at @thomasforth, StackOverflow, and GitHub. I even have a LinkedIn profile, though it's often out of date. Or check out some of the links above, at imactivate, or at ODILeeds' project page to see what I've been up to recently. 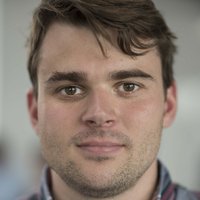 Hi, I'm Tom Forth. You can reach me at thomas.forth@gmail.com.I run a small startup called imactivate and I'm the Head of Data of ODILeeds. I live in Birmingham, UK but you can often find me in Leeds.